What the FDA Actually Said: Is DCM Reported in Unexpected Breeds?

The rest of the update is simply documenting the data that they have found; a lab report. It is interesting information, but ultimately of limited use. Seeing as we don’t know the baseline occurrence of the disease, we should all be very careful about drawing conclusions.

Is DCM Reported in Unexpected Breeds?

TL;DR: Yes, but probably because we do not understand how often DCM actually occurs.

First, here’s what the FDA gives us in their lab report. I edited this chart to highlight the breeds that were already thought to be genetically predisposed to have a higher risk of developing DCM. 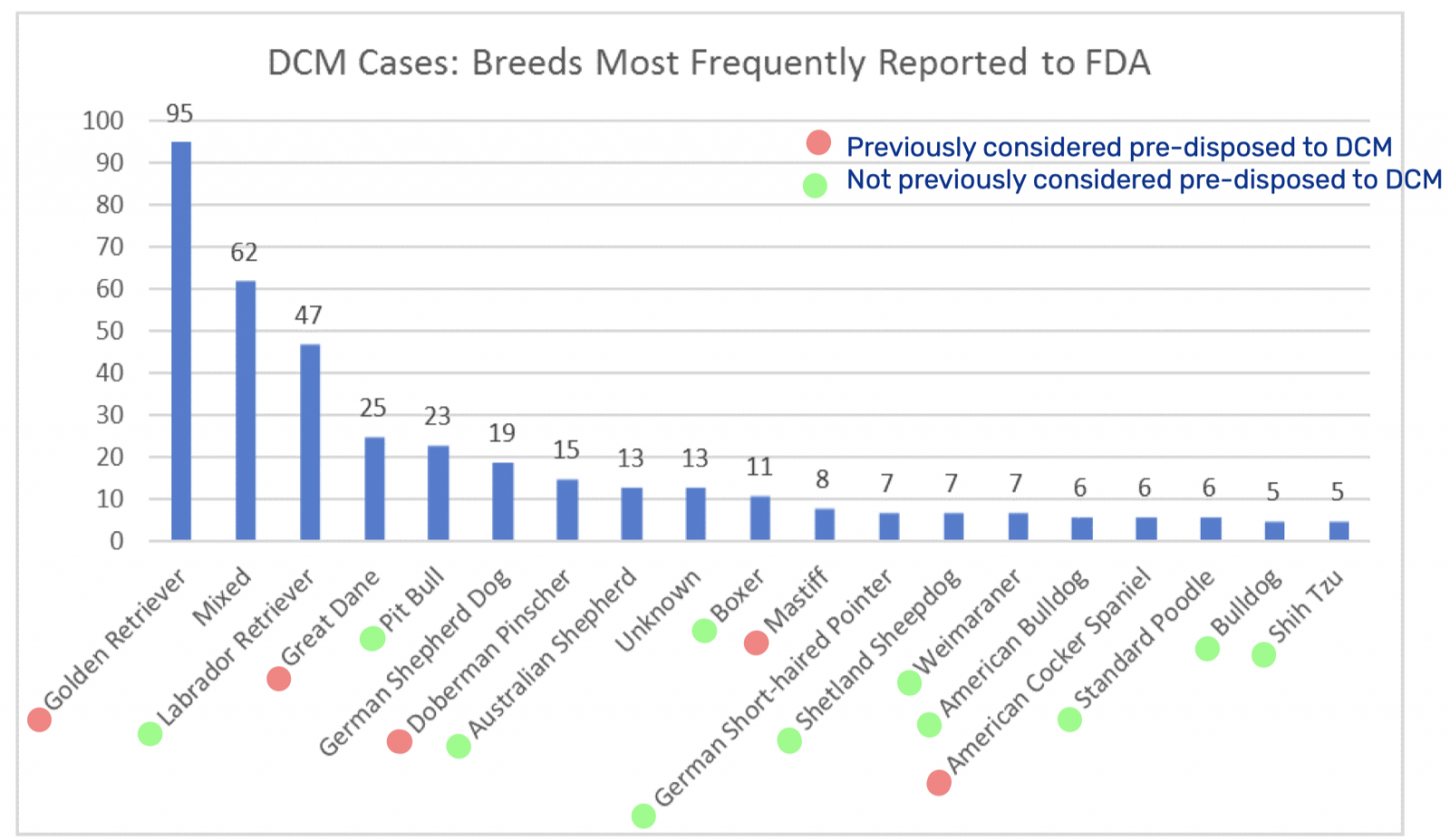 Looking at the breed breakdown from the FDA’s data, we see a mix of breeds here but it appears to show that Golden Retrievers and Labrador Retrievers are at a terrible risk. Hold that thought while we grab some other quotes:

“FDA has observed a reporting bias for breeds like Golden Retrievers due to breed-specific social media groups and activities that have raised awareness of the issue in these communities and urged owners and vets to submit reports to FDA.”

“Past publications and research suggest that Golden Retrievers may be genetically predisposed to taurine deficiency, which is well-documented as potentially leading to DCM.”

One final piece of data; the Golden Retriever is the 3rd most popular breed in the US and the Labrador Retriever is #1.

Well what does THIS all mean? When you have very popular breeds showing up often in your data, it can help lend some credence that you have a representative data sample. If there are a LOT of retrievers in the US, we should expect to see them in the data a lot.

Well, maybe. The FDA quote above tells us their data is biased and heavy with entries from Golden Retriever parents.

So is DCM being reported in unexpected breeds? It looks like it is. The caution here is that we still can’t make a meaningful conclusion on breed susceptibility here and this chart gives the impression that Golden’s and Labs are in dire straights, which is most likely due to the bias in the dataset. However, to lean on What the FDA Actually Said: Are DCM Rates on the Rise?, we simply don’t know if these breeds were developing DCM on a regular basis before the recent surge in DCM reports to the FDA.