What the FDA Actually Said: Are DCM Rates on the Rise?

The rest of the update is simply documenting the data that they have found; a lab report. It’s interesting information, but because we don’t know the baseline occurrence of the disease in the general pet dog population, we should all be very careful about drawing conclusions.

Are DCM Rates on the Rise?

TL;DR: No one really knows.

Straight up, I’m not sure that we can say rates of occurrence of DCM are on the rise. Let’s walk through the facts starting with this chart on reports of DCM per year. 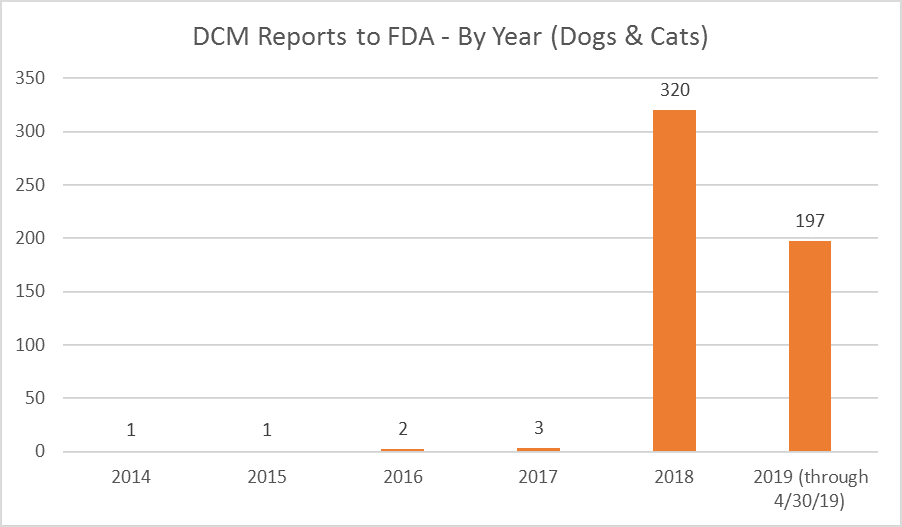 Here are some related quotes from various parts of the report:

“It’s also important to note that the FDA states that most of the 77 million pet dogs in the United States have been eating pet food without apparently developing DCM.”

“Another puzzling aspect of the recent spike in DCM cases is that they have occurred just in the last few years.”

“Because the occurrence of different diseases in dogs and cats is not routinely tracked and there is no widespread surveillance system like the Centers for Disease Control and Prevention have for human health, we do not have a measure of the typical rate of occurrence of disease apart from what is reported to the FDA.”

So are rates of occurrence of DCM on the rise? Honestly, no one knows. The FDA does not understand how often DCM occurs in dogs but they tell us that the vast majority of the 77 million pet dogs in the US are eating pet food without a problem.

If we don’t know how often it happens, and seeing as the FDA “suspect[s] that cases are underreported” it would make sense that the actual occurrence of DCM is higher than previously believed. To pin the blame for a sudden “surge” of DCM reports on grain free foods is disingenuous at best, especially when we have no idea how often it occurs. It may simply turn out that DCM is much more prevalent in all dogs than was previously believed and diet has nothing to do with it.