What the FDA Actually Said: Are Boutique Foods to Blame?

The rest of the update is simply documenting the data that they have found; a lab report. It is interesting information, but ultimately of limited use. Seeing as we don’t know the baseline occurrence of the disease, we should all be very careful about drawing conclusions.

Are Boutique Foods to Blame?

TL;DR: Maybe Yes, Maybe No. But Mostly No.

Let’s start by clarifying what generally constitutes a “boutique” food. When we hear “boutique” we are typically using shorthand for “boutique, exotic-ingredient and grain-free.” It appears as though it is intended to cover any type of food that deviates from the standard chicken/beef protein + corn/wheat/soy kibble combination. Raw? Home-made? Vegetarian? BEG, BEG and more BEG. The important thing here is that we aren’t just talking about the protein, but the grain or grain substitute as well.

Let’s have a look at the charts from the FDA here. 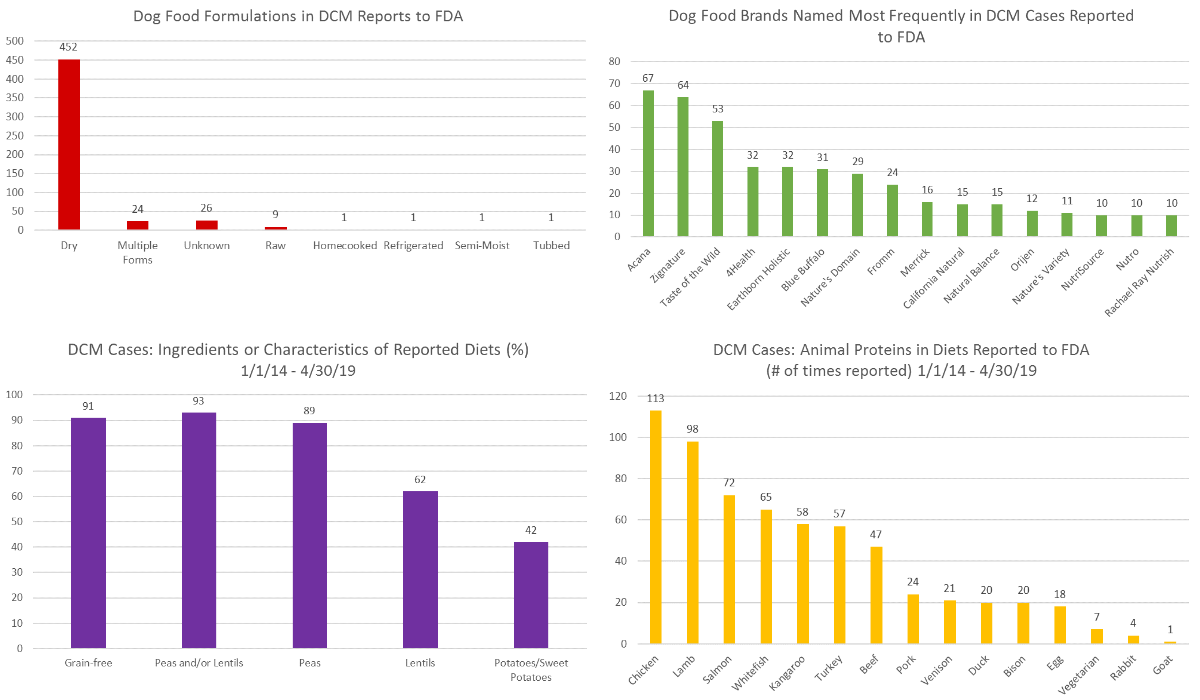 Let’s start with the red chart on food types. It shows that kibble (at 86% of all types) is the most prominent in the FDA’s data. It also reports that of the cases in their database, 2% were being fed raw diets.

Here’s where we need to be careful about drawing conclusions. What we really need is the occurrence rate of DCM by food type. Unfortunately since we don’t know how often DCM actually occurs, so we can’t gain any insight into the relative safety of these food types. Is your dog more likely to develop DCM while eating kibble? Based on this chart (and all of the charts in the section) we just don’t know.

If we want to extrapolate at all, the best we can do is look at sales data by food type and compare the percentages being sold to the FDA’s data. Our sales data would suggest that more than 2% of the dogs in Central Oregon are being fed raw diets. Meaning that the DCM rate of occurrence in pets on raw food is lower than other food types.

On to the green chart that calls out specific brands. This chart shows 16 brands, and that’s what the headlines certainly picked up, but in total, 70 different brands of food were named in the FDA’s data.

We see the names from the headlines (Acana, Zignature and Taste of the Wild) but we also see Pedigree, Purina, Blue Buffalo and Royal Canin as well. In general, if someone is going to feed a grain free diet, they aren’t going to go to the big 5. They will go to Acana, Zignature or Taste of the Wild. They are grain free foods at a good price point.

What we don’t see here are other big selling grain free foods from Nulo or FirstMate. This was surprising but there may be a couple of reasons.

We don’t have any data on where the FDA’s data is coming from so no luck there, but we do know that Nulo and FirstMate get over 80% of their protein from animal sources. Nature’s Variety was named in 2% of the FDA’s entries and they advertise over 70% of their protein is animal based.

Peas and Lentils and Potatoes, Oh my

The purple chart shows that the vast majority of foods in the FDA’s database had peas, lentils and/or potatoes in them. Remember, we do not know the general occurrence of DCM in the entire pet dog population. This chart does show that 91% of the pets in this dataset were eating a diet that included peas. This chart and topic of discussion warrants its own post. Stay tuned.

The last chart here shows the prominence of protein type per pet in the FDA’s data. The top three proteins are chicken, lamb and salmon. These are not “boutique” proteins. They are standard use proteins that have been in pet food for decades. Just like the other charts though, we cannot gain any insight into the occurrence rate of DCM per protein type. So while we can talk more about the role of peas, lentils and potatoes in pet food, we are at a dead end here.

Alright, that was a LOT to type out and really we’re just scratching the surface. The big takeaways here are: